Recently, the retired footballer made an appearance on Ryan Seacrest’s new TV show, Knock Knock Live, which aims to reward deserving families with loads of cash and prizes. Aside from that, they get to enjoy surprise visits from their favorite Hollywood A-listers. For some, having David Beckham show up in front of the door is already rewarding experience. But for one family, he didn’t just knock and show up at their entrance, he also gave them a gift of iPhones and a check worth $100,000. The lucky family was the Gonzalez family. As Mrs. Gonzalez opened the door, she couldn’t help but scream, “Oh my God”. 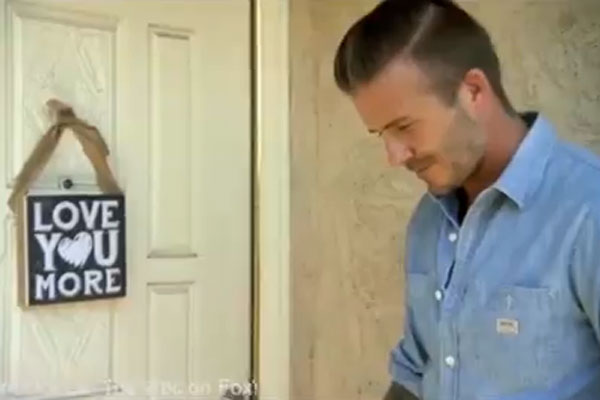 In response, Beckham said, “It’s me! David Beckham and I’ve got a huge surprise for you!” When the family invited him in, Beckham confirmed that everyone inside the house knew who he was. By then, the ex-footballer revealed to the very emotional family the reason he was there.

“I’m here for a few reasons,” he said. He then gave gift brand new iPhones to each member of the family, with a decade’s worth of phone bills already covered.

But it seems that the iPhones were not just his presents. He continued, “One of the main reasons why I’m here is I was told about your family and I was very honored to come down here and to be welcomed into your home and actually meet you one-on-one”. Beckham then added, “I’ve heard how much you work, I’ve heard what an amazing family together you are, you’re such a tight-knit family. So, thanks to my friends at Sprint, I have this for you”. He then handed over the $100,000-worth check. Not only did Mr. Gonzalez became very emotional, but the entire family also became sentimental because the money meant they will have financial security. They will no longer have to worry about their future finances.

Long ago, Mr. Gonzalez was a professional footballer in Mexico. But, he had to give up his passion and work as a construction worker so that he can support his family. After the tear-jerking moments, the family played a game of football with Beckham.

When asked about what he felt, Beckham replied, “gift-ing the check for $100K, you can see it means so much to them. You can see it has literally changed their lives. I’m very fortunate in my life, and to be able to do this for this family that works so hard, it is an amazing feeling.”

Watch the heartwarming surprise video below: