When you think of a desert, you perceive it to be this dry land with sand everywhere you look, so most of you may argue about some items being on this list, because they could not be classified as a desert. However, being sandy and all isn’t the entire definition of a desert. Any piece of land that is barren that receives little precipitation annually is considered a desert as they make living conditions for plants and animals hostile.

Now that we have set that out, we bring to you the world’s most fascinating deserts.

1.  Namib (Namibia): The Only Desert with Elephants

The Namib Desert, which lies deep south of Africa, shares the location of the Namib-Naukluft National Partk with the neighboring Angola. This particular desert is less vast than the Sahara, but it holds so much promise.

The Sossusvlei sand dunes were recorded to be the highest in the world, forming at 300 meters high. If you are lucky enough, you might also spot some elephants across the desert, thus making the Namib the only desert to be inhabited by these mighty giants.

It is also considered as the oldest desert in the world, and a myriad of species of floras and faunas can be found only here, which has puzzled the geologists for years.

However, strong southerly winds with fogs and strong currents cause the sailors to be lost off coast. This led the northern coast of the desert to be dubbed as the Skeleton Coast for the numerous shipwrecks that can be found there, some of which are situated 50 meters inland as the desert slowly reclaims the water westward.

One of the most iconic landmarks of Bolivia is the Salar, an enormous salt desert in the middle of the Altiplano. It is basically a massive flat desert mirror that reflects the sun and the sky. There are also several lakes in the desert with vibrant colors due to the mineral deposits in the region.

This area was a part of the giant and prehistoric Lake Minchin 40,000 years ago until the lake dried. The aftermath left behind two lakes, the  Poopó Lake and Uru Uru Lake, and two major salt deserts, Salar de Coipasa and the larger Uyuni.

Uyuni, which is twenty-five times bigger than the size of the Bonneville Salt Flats in the United States, is estimated to have 10 billion tons of salt deposit, and 25,000 tons of it is extracted annually.

The largest part of the northern Chilean territory is occupied by the Atacama Desert, located between the coast of Arica and Antofagasta. This place is also recorded in the Guinness Book of World Records as the driest place in the world.

However, at the south of the Tropic of Capricorn, the desert boasts vegetation. The coastal mists, camanchas, are abundant south of Antofagasta, and it provides the humidity that is necessary to keep the coastal scenic vegetation thriving, combined with the harsh savings of water in normal dry years. Unfortunately, this affects their growth for their survival and reproduction.

4.  The Black Desert (Egypt): The Desert with Black Stones

The Black Desert is a region of volcano-shaped mountains with enormous quantities of small black stones, which is located 100 kilometer northeast of the White Desert. The stones lay scattered across the orange-brown ground, contrary to the White Desert that displays white formations. The view from the peaks of this uninhabited area is pretty mesmerizing.

Australia is home to four large deserts: the Sturt’s Stoney Desert, Tanami Desert, the Great Victoria Desert, and the Simpson Desert. The latter also goes by the name of The Big Red due to the presence of the world’s largest parallel dunes of red sand. These north-south oriented dunes, held in the position with vegetation, come in various heights, from three meters in the west to 30 meters on the eastern side.

The most famous dune in the Big Red is the Nappanerica, which stands 40 meters high. 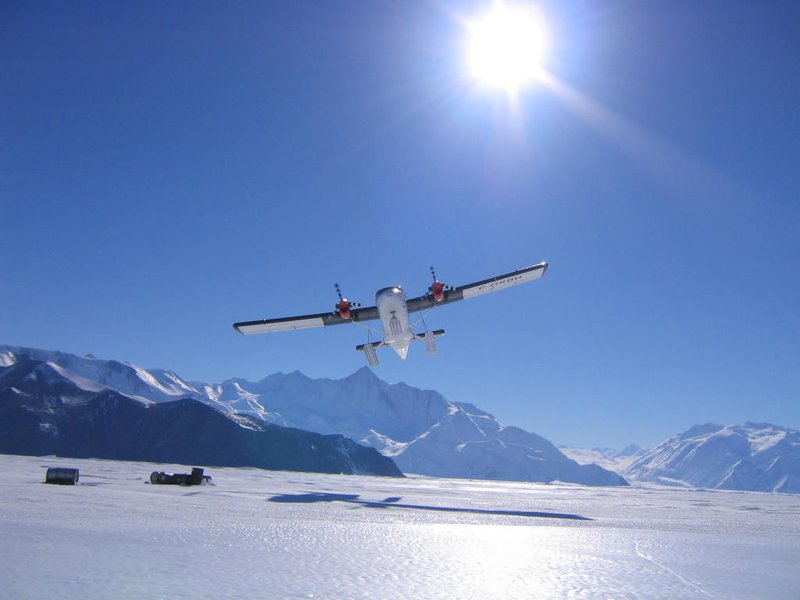 Antarctica must be the most uninhabited place on the planet all year round due to its temperature extremities. Back in 1983, scientists have recorded freezing temperatures as low as -129 degrees Fahrenheit. It is also considered as the wettest yet driest place on Earth as it is mostly made up of 98 percent of ice, which is technically wet.

But with its coldness, it sees little precipitation that only reaches two inches per year, making it fit into the description of a desert.

One of the largest sandy deserts on earth is Taklamakan, ranking fifteenth in size of the world’s largest largest nonpolar deserts. It has an area of 270,000 km2 (100,000 mi2) of the Tarim Basin, which has the dimensions of 1,000 kilometers (620 mi) long and 400 kilometers (250 mi) wide. Travelers would cross the northern part of the desert while the southern edges can be accessed by two branches of the Silk Road to avoid the arid wasteland.

China’s largest desert has felt its lowest temperature after eleven consecutive days of snowfall in 2008, which is rare. The snow has covered 337,600 square kilometers of the desert. Since the Black Desert is on this list, its counterpart, the White Desert, also made it. Also known as the Sahara el Beyda, the desert is located 45 kilometers (30 miles) north of Farafra. The white cream–colored desert contains a massive chalk rock formations that have been the result of occasional sandstorms. With area of 8.6 million km², the famous Sahara is the world’s largest desert, which covers most of North Africa. Its maximum length is 4,800 kilometers, running from west to east, and up to 1,200 km from north to south with around 4 million inhabitants. The Saharan desert covers most of Mauritania, Western Sahara, Algeria, Libya, Egypt, Sudan, Chad, Niger, and Mali, and touches Morocco and Tunisia.

Located in the State of Maranhão, on the north shore of Brazil, the Lençóis Maranhenses National Park has 300 square kilometers (155,000 ha) of white dunes that cover up over 50 kilometers (31 miles) from the coast of its deep blue lagoons, creating a truly spectacular landscape that no one can rival.

Despite its desert-like appearance, Lençóis Maranhenses receives rainfall of 1,600 mm (i.e. 62.9 inches) annually, 300 times more than in the Sahara. During rainy days, the lagoons become the habitat of various species of sea creatures including fish, turtles, and clams. However, during the drought seasons, the lagoons start to dry up.

With a situation like this, it is still a mystery how the creatures survive when the waters are completely gone. They could not have possibly left the lagoons, but they sure are alive and well when the water fills the area up again. One of the hypotheses to describe the phenomenon is that the eggs are secured alive in the sad until the rain comes back.

Take a look at some of the amazing destinations in the world (other than deserts):